I worked at a private elementary school for a year as an assistant to the pre-K and Kindergarten art teacher and the days when she was out were the BEST because I was the automatic substitute.  The following is a project I did with the kindergartners on one of those days.

I was going for something simple with little clean-up since it was just me and BIG group of kids throughout the day, so I decided on having the children do a narrative drawing on Scratch Art paper.  What (you might be asking) is Scratch Art paper?  It's a double layered paper, the bottom being a glossy rainbow pattern with a top coat of a thin white or black film that is easily scratched off (much like a lottery ticket) with an included wooden stylus.  I have seen it at my local craft stores, but if you can't find it locally, you can order it online from DickBlick.com 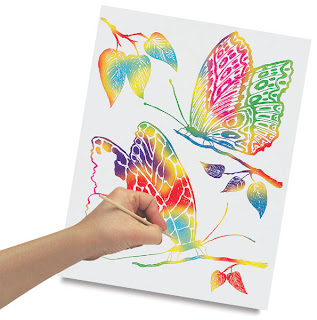 I'll admit that I was a little unsure about this project with this particular group of kids...they could be really challenging...high energy, behavioral issues, and the boys GREATLY outnumbered the girls.  My concern was that this project (being super simple with only two non-messy supplies) was going to bore them into attempted chaos.  My goal was for them to come up with an original story that they would illustrate using the scratch paper.  After showing them how to use the paper, I of course had to introduce them to the very pointy wooden stylus with specific instructions that it was to be used ONLY for the scratch paper and NOT as a lightsaber.  Star Wars was big with this group.  You dig?  ;-)  Then the kids and I made up a story (everyone got a quick turn to add to it) and I drew it on the board as we went along.  I can't remember it exactly, but I know it was super silly because we were all laughing about it.  I really stressed the importance of them creating their VERY OWN story from their VERY OWN awesome brains in an effort to avoid having ten drawings of the exact same Star Wars battle scene....and then they started scratching away!
I was astonished at how quiet this rowdy bunch became as they started scratching out their stories illustrations.  They sat still.  They weren't antagonizing each other.  They were LOVING this...and so was I!  I had permagrin.  Before class ended I went around to write down their stories.  Some just said a few sentences while others had me feverishly writing a whole paragraphs worth.
I absolutely LOVE "kid-speak"...the way they form backwards sentences and mis-pronounce things....it's my favorite, so I'm always sure to write word for word (misspellings and all) what they say.  I don't have any copies of the stories that I transcribed, but I did manage to get a copy of two of the masterpieces.... 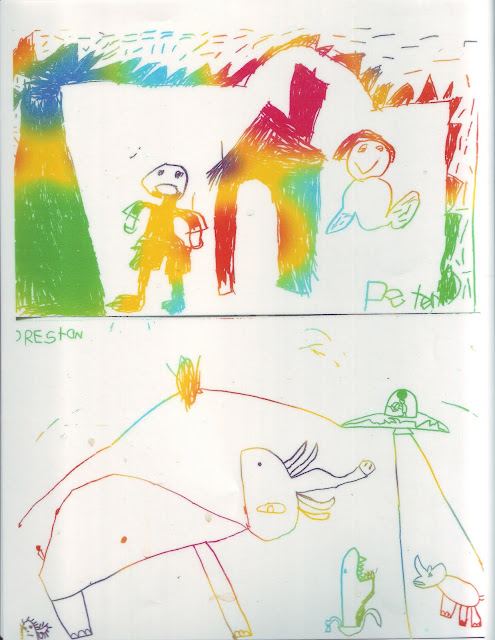 I mean...I seriously had a fit over the one on the bottom.  How awesome is that!?!?  Preston rocked it out.  A shark coming out of a snake, an elephant (my favorite creature on this earth) with four tusks, and a killer alien in a spaceship with tractor beams!  He was one of those super duper creative kids...very interesting little dude.
Peter (the young artist on the top) was one of the kindest and most mellow boys that I've ever taught.  I really loved him...he seemed so mature for his age and was very artistic.  He made some really beautiful artwork.  I really loved the border around his illustration.
There were SO many great ones....I wish I had photocopied them all along with the stories.  The kids and I had so much FUN with this project and it was by far the easiest and best day I'd had with them.
How this project is educational:
Of course this project is fun, but there is also some really quality educational lessons in here too.
A child whose day includes listening to rhythmic sounds and lively stories is more likely to grow up loving books, and a child who loves books will want to learn to read them.
Have fun & get messy!
- Jenna  :-)
Posted by Jenna @ Featherhead Studio at 2:46 PM

Promote Your Page Too